The school bells are indeed ringing around here - we start on Wednesday, but the teachers had to report to work today.

Unlike legions of kids who are gearing up for the first day - and in spite of protestations to the contrary - are actually pretty excited to get back to the routine of school - I am not excited!

Each year it gets worse - and I was wondering why. In my case, things keep changing - and not always for the better. I try not to be negative - and by next week, I will be in the swing of things and won't be reflecting on such things as much - but one of the first things I discovered about teaching was that it was all about change. You get used to a group of students, a place, a routine. But the next year there are new students to get to know, old students who are older and a little different, and sometimes a new classroom is assigned or the textbooks change or the bell schedule is different or your prep period is reassigned.

All of the above have happened to me on a regular basis. And I have pretty much acknowledged that it's going to be different each year. But something else is changing too. Something more fundamental. Harry says it's the Wal Mart Effect - and I think he's right.

The principal needed my much-loved classroom for the discipline room. I could understand that - it's right next to the counselor's office in the main hall and it's a good place. But she put the other SPED teacher and me into the two smallest classrooms in the school!

Then the principal wanted the other SPED teacher and me to share students so that the kids would get more variety in their day. So that means bigger classes, since I don't just have kids on my caseload. And in a smaller classroom, bigger classes is huge!!(Bigger in SPED means 15 instead of 8)

There was supposed to be another teacher hired, but for some reason they didn't. We are keenly disappointed, because more teachers mean fewer students in each class which means more opportunity to help more kids! It's really just basic math!

So you can see that the corporation (the district) is squeezing everything to get a better product for less. (I won't even go into the testing mania we are in here in America - no child left behind indeed - this madness seems to be leaving more, not less, kids behind - don't get me started!)

Wal Mart - who knew it could invade the classroom?!
Posted by grannybabs at 10:37 PM 6 comments:

"Where Nothing Is Long Ago" 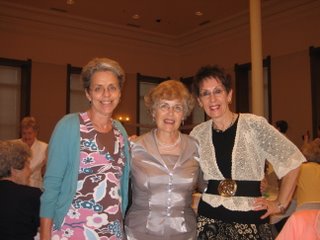 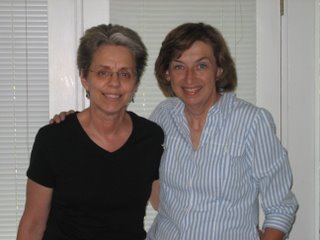 is the title of a book about growing up in Utah. Virginia Sorenson, an author I admire, writes about her growing up years in a small Utah town.

I wasn't raised in Utah, but whenever I go there, especially to the Salt Lake/Provo area, I find myself reflecting on long ago events that seem to be in the present - at least they are alive in my mind.

The same was true this time also. When we walked into the Y Center (and it will always be the Y Center to me - never the Wilk! for heaven's sake!)I noticed the floors - and I said to Mom, "These are the very same floors I walked on over 40 years ago!" It's true, some things never change!

When I mentioned it to Harry, he said they are terrazzo - and terrazzo apparently is almost ageless. I'm glad - because those floors anchor the building in the past for me - and it wouldn't hold any memories for me if there wasn't some anchor there. Much has changed on the BYU campus - but much has stayed the same - at least in spirt if not in fact!

I enjoyed seeing old roommates this go round - my former roommates remain good friends - maybe I have forgotten all the negative and only retain the positive, but that's okay with me. These women were part of a very significant time in my life - and we can go years without seeing each other, and when we do see each other, the years melt away. It's the very best kind of friendship I can think of!
Posted by grannybabs at 1:03 PM 8 comments:

At Dorothy's funeral, an old friend, who also used to live in Monrovia, was one of the speakers. Her theme was "The Camelot Years." She went over all the things we used to do as young wives and mothers. She related it all to different aspects of Dorothy's life, but it brought back a lot of memeories.

My thought was that we need to cherish the moment - whatever moment it is. I reflect often on the past and enjoy getting together with old friends, but there is a present too, and I realize now that I need to preserve it also.

Another thought that came to me happened as we went into the viewing. Dorothy's son and his wife, the parents of little Jacob who drowned, were standing there. Sue hugged her and seemed to know what to say - or at least how long to hug her! I could only say, "I'm so sorry."

As we left the room, I said to Sue, "I am a woman of words. I value words. I love words. I think that words are the medium of choice. But right now, words fail me. There are no words to say right now."

Then today during Sacrament meeting, it came to me that there are many times when words fail us - and that is when we need to rely on the spirit - because the spirit can say what words can't say.

It has been an instructive weekend.
Posted by grannybabs at 11:00 PM 2 comments: 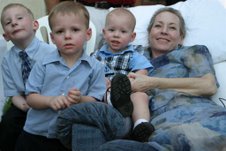 On July 13th, I wrote a post about our friend Dorothy, who was struggling with cancer. We received an email today that she died morning. She had made it through her daughter's wedding, which was very important to her. The photo is from the wedding day at the temple, showing Dorothy on her gurney with her three grandsons.

Her husband has sent regular emails regarding her condition, and he reported that she was exhausted by all the wedding activities, but grateful that she had been able to be there for her daughter. The doctors had told him that she would rally to meet the occasion, then decline rapidly. That is apparently just how it went.

Her pain had increased and even morphine was not enough. She asked for her children who were out of state to come and say goodbye. She asked for a blessing that she could go in peace, and her family told her it was okay to go - they found it too difficult to see her in so much pain.

Her death apparently was not easy and peaceful - hospice had been there but they were short handed and so Don was alone with her as she struggled to breathe and slowly let go. It was comforting to see her at peace, but just prior to her death the family had been subjected to another tragedy.

Her three young grandsons, who had traveled from Utah with their parents, who wanted to be at Dorothy's bedside, were being cared for by a neighbor. While there, the 2 year old boy accidentally drowned. Don made it to the hospital to give him a blessing, but he did not survive. This happened on Monday and Dorothy died today, Tuesday.

I know the Lord tells us that we are only given as much as we can bear, but in his email, Don said, ". . .this is unbearable." I cannot even imagine such grief.

The family is taking comfort in the knowledge that Jacob and his beloved grandma are probably together, helping one another. Dorothy had expressed concerns about "dying well" and said, "What if I get lost and can't find my way?" Perhaps Jacob is helping her do just that.

On another sad note, Dorothy's mom suffered a massive stroke a few days after the wedding so her sister was staying with her. Neither of them were able to be with Dorothy at the end.

Don concluded his email with these words, and I find them inspiring, "I remain steadfast in Christ, willing to bow to Heavenly Father's will."

My trials are not the same as his - or yours for that matter. But we can all strive to "remain steadfast in Christ" so that our trials will not divide or destroy us.
Posted by grannybabs at 4:09 PM 5 comments: