Something to think about

"As we express our gratitude, we must never forget that the highest appreciation is not to utter words, but to live by them." 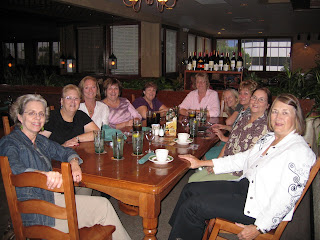 Michele Yoffe gets together with Nancy Locklair, Dalene Johnson and Adele Cornils once a month - the initials of their first names spell DAMN! So they call it their "DAMN get together!" That is somewhat clever.

Michele and I and Anna May and Sandee Gray are all born in 1945 - so we call ourselves "The Girls of '45" and we get together when we can find a time we can all be there!!

It was getting ridiculous, so Michele said why didn't we join her other group - I'm not going to get caught up in the jokes we could make here - and so we did. And I invited Karan to come along, Sandee invited Buffy, and I'm not sure how Sharon Socha figured into the mix, but she's a great addition to any group!

When Dalene forwarded the picture to me, I thought about how I used to eat lunch with or teach with all of these women. I miss the ones who are no longer there - only Buffy, Sandee, Anna May and I are still at Clifton.

And I thought about how each one of them had had an influence on my life or my teaching techniques or my perceptions of the world.

"Make new friends but keep the old. One is silver, but the other is gold."

A little cheesy but true!

I love my girlfriends!
Posted by grannybabs at 8:54 PM 1 comment: 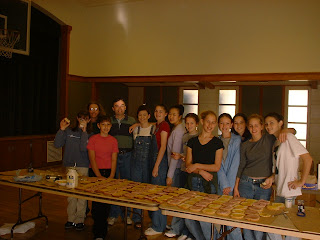 (This photo - of the youth in our ward preparing lunches for the homeless - has nothing to do with the following post - but Karl says you need pictures to attract readers - it's kind of like fundraising - maybe in reverse??)

I started to make a comment on Phoebe's blog about her fund-raising woes.

It got too long - decided I had too much to say.

First off, if they would fund education like they are supposed to, we wouldn't need to fundraise. The government has mandated lots of programs - and then has not fully-funded all of them - Special Education in particular.

(Let me also note that you may think your district is spending money that you think should go somewhere else, but categorical funds can only be spent on what they are designated for. So CompEd computers in the classroom can only be used by CompEd students, and so on. Here in the middle of the budget crisis in California, we had
$80,000 we had to spend on new technology. So we have new computers and smart boards and everyone thinks we are spendthrifts - but we would have lost the money if we hadn't spent it by September of this year.)

Everyone gets annoyed with SPED - but people need to get annoyed with their legislators - IDEA - the Individuals With Disabilities Education Act - was passed in 1975. It's a good law, and at the time, the government guaranteed to fund 40% of it - and since then, they have never funded more than 17%! So the difference comes from the General Fund - which impacts schools very directly - and thus fundraising came to the forefront.

Then it "caught on" as a business idea and the bake sales were taken over by "Magazine Mary" and the like, and I find that less than appealing.

I don't remember any fundraising from my school days. They did have PTA when I was a kid - but I'm pretty sure my mom never joined. And those women mostly worked around the school, sponsoring things like polio vaccination drives and the like - they did do a yearly carnival too - which I loved.

I was amazed in Utah to discover that PTA was the happening place to be - I mean, the people running for PTA President had posters and everything - because more than one person wanted the job!! (Around here they beg, cajole and threaten - this year they have a couple of co-presidents, which is working out well.)

I join now because they come and ask the staff to join - and they have a drawing - and I won a gift card to Target - that's the way to motivate teachers!

And I remember when Phoebe left MHS, they handed her a bill for something - that she had to pay or she couldn't graduate!! I think it was Leadership dues or something ridiculous.

So Dad said, "Okay, we'll send them an itemized invoice for all the weeks they used the truck to haul their stuff to the recycling place, drive it around the track for Homecoming, and take kids to set up for the Jr. Prom!"

So I understand Phoebe's frustration.

But I will tell you, since many of the PTA moms and dads are parents of my students, the PTA at our site provides lots of perks that just wouldn't happen otherwise. Actually in one of the fundraisers, there was a lunch bag I really wanted, so I asked a girl at church if she was doing the fundraiser and I bought it from her. She was pretty excited. If you sell 5 items, you get some sort of prize that middle school kids find desirable - I think you miss class for a pizza party or something.

But I pretty much was the fundraiser Scrooge and never bought anything - except the year I was in charge of the Medic-Alerts bracelet sale - I ended up being very glad I'd bought one for everyone because Bernie left the door open one day and Eliza toddled out to the middle of Hillcrest - and was found and returned to us because of the bracelet!!

Towards the end of my school years with kids, I started just mailing in a check - saying I'd be happy to give $25 but wasn't going to let my kids do fundraisers. Now that is a fundraiser in itself!

Our district is in dire straights - they may close a school and lay off 47 teachers if the state education budget gets cut anymore. One of the solutions is to ask each family to give $100 - if every family did, they'd have $50,000 - which could keep one teacher on! Bonny's district does this, but I think it supports extras - and they ask for more than $100!

When it comes to Scouts - Boy and Girl - I sort of have a different policy. If the young person contacts me, I will buy something. If their parents contact me, I tell them to have the kid call or talk to me - sometimes they do, sometimes they don't - either way I think they get annoyed with me, but that's too bad.

I remember one year Harry and Damond canvassed the neighborhood selling Scout-O-Rama tickets - and no one, except the Allsops - who at the time were less-active - bought one. They were like 50 cents! I was more than annoyed, because several kids on our street went to private school - and if you think public schools have lots of fund-raisers, try going to a private school - they must have them weekly or something! - and I had bought something from each one of them!! That was when I decided not to buy from them anymore - and I explained why the next time they came around. But then we moved to Primrose, and that took care of that!

In closing let me say that I still buy stuff from my grandkids!! Some fundraisers email me - that was very convenient - some sent a form in the mail that my granddaughter had filled out - that was easy too. And sometimes they just show me the catalogs. Anyway they do it, I will buy something from the grandkids for their school, team or Scout group.

And if they start their own business, I could probably find something I wanted there too!

It may not be "Holiday Inn" here, but we are getting ready to make the holidays happen for the Terrill clan coming to celebrate!! 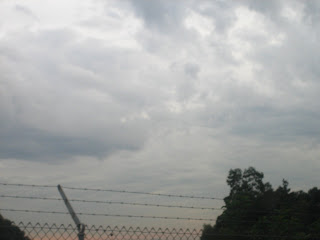 Actually, it was finally a cool, breezy fall day around here, so Dad and I took a hike up Monrovia Canyon on Friday afternoon. Which led us to the cabin where we have celebrated in the past - and will celebrate again. 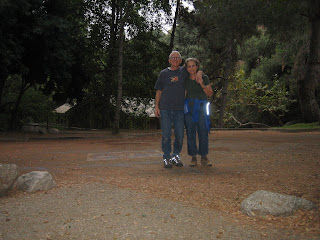 Do you love our neon trim?? 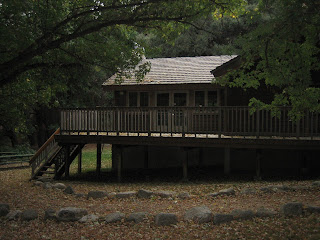 We've actually come up with some good ideas for things to do, etc. But feel free to share any ideas or suggestions - we want this to be fun for everyone! 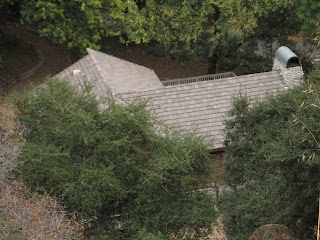 This is the view looking down when you are hiking. And the "skyscape" was me trying to be artsy. The sky was overcast and really very lovely - sunset was approaching so there was a hint of color diffusing the whole sky.

And we went home to a great meal - and 3 trick or treaters!!

(At around 8:30 I could hear some rowdy kids down near Hillcrest. So I raced around turning out lights and we dove under the covers to hide from them. Dad said we should just give them the rest of the candy, but I told him I'm saving it to use in the classroom for rewards and the like. Besides, it was fun to listen to them castigating their buddy who had led them up the street. Maybe they were novices and thought they were on Gold Hill!!)
Posted by grannybabs at 2:24 PM 3 comments: