I guess I'm not a total Halloween Scrooge after all - looks like I dressed up one year - I think this hair was from the Santa costume. 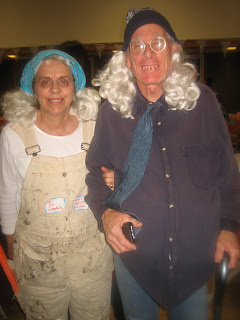 And I've always been a willing participant in the trunk or treat activity. (But I did stay at home this year - my dogs were killin' me that night!!) 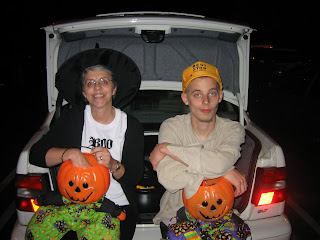 I'm thinking that Alli and Meli's kids will come trick or treating again this year - maybe I should show them this!!

This is from the last Sunday Halloween that I remember - although there have been others since this one - I just don't remember them!! Probably because I didn't have 3 little kids at home who were told they were not going trick or treating - they seemed to enjoy themselves anyway. 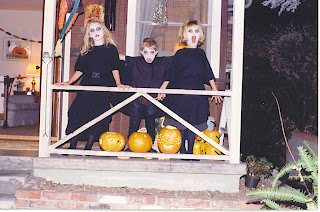 And of course, the all-time fave Halloween photo - Phoebe commented this year when I was telling someone about it, "I'm really amazed that quiet Linda came decked out like this." I guess Linda does have her zany side!! We "Girls of '45" are like that you know!! 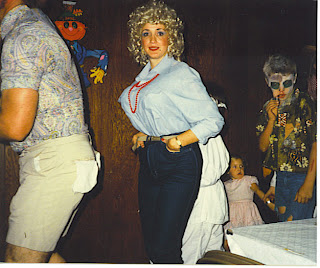 I was also thinking about how Sunday trick or treating didn't exist in my day. And even 30 years ago, after we moved here, Halloween was on a Sunday - and everyone trick or treated on Saturday night.

Times have changed.
Posted by grannybabs at 9:56 PM No comments:

Movie Night at the Krikorian

Dad and I had a hot date tonight - went and saw Hereafter. We'd read the reviews - which were generally positive - although some were quite negative - and thought we'd enjoy it. 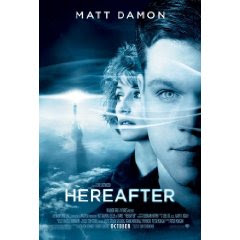 I enjoyed it - it seemed a little disjointed - 3 stories that finally intersect at the end - in a somewhat contrived manner. But I always believe in "the willing suspension of disbelief" so those criticisms didn't bother me much.

It was entertaining - and sometimes that's all you're after!
Posted by grannybabs at 10:35 PM 1 comment:

Eliza posted about Halloween - and her supposed deficiencies as a Halloween afficionado. And it made me think about all the Halloweens over the years - there have been many, that is for sure!! 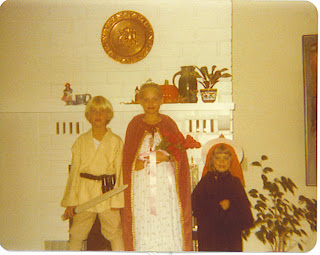 I grew up in a family where Halloween meant digging through the rag bag and coming up with either a gypsy costume or a hobo costume - depending on your gender. And if you were old enough, you dug around for an old pillowcase to bring in your trick or treating haul. Eyebrow pencil took care of the make up. And no one, absolutely no one, decorated their house for Halloween - except for Jack-o-lanterns. (A haul meant getting full-size candy bars - and trying to keep them away from my dad!) 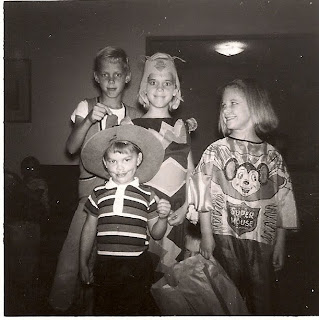 With the advent of cheap, store-bought costumes, the get-ups changed a bit. This shot is from 1965, the year I stayed home fall semester to earn the money for Grenoble. The kids are Bobby, Leslie, Donna, and David. I think I did the honors with the eyebrow pencil. I think I took them trick or treating too. And can you find Richard, hiding in the picture?? 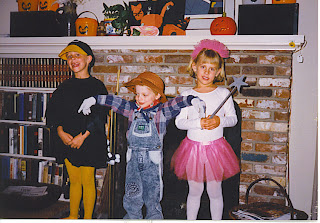 Our children have usually been enthusiastic about dressing up. And some years I went to a lot of trouble making costumes. And for Bonny's kindergarten year, Dad made a beanbag toss wooden pumpkin that still gets used at ward Halloween parties.

But I remember one year when I made a charming gypsy costume for Bonny - she was three - and she let me dress her up and even take a photo - but she would have nothing to do with trick-or-treating - or even opening up the door for trick-or-treaters!!

Over the years, as decorating for Halloween became almost de rigeur, I was known for decorating the house. And I wore Halloween themed clothing too - and jewelry. I've toned that down over the years. I gave Halloween socks and kitchen towels as gifts. I sent - and send still - Halloween cards.

But I don't dress up - and really never have. I have a tee shirt that says, "This is my costume," and that's about it.

Dad used to dress up - and the two of us wore Julius Caesar costumes a couple of years ago - but no one could tell what we were - that was disappointing! Dad also has some famous Halloween moments - probably the most notable being the time he came as a housewife!! 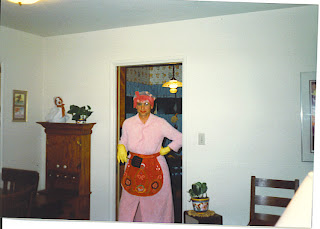 Be sure to save me the candy corn and the circus peanuts though!!
Posted by grannybabs at 4:51 PM 7 comments:

A few weeks ago our Stake Relief Society put on a dinner prior to the Women's Broadcast. This was our 4th year. We don't actually do it - the High Council and the Stake Presidency do the work - but we set up and decorate the tables. 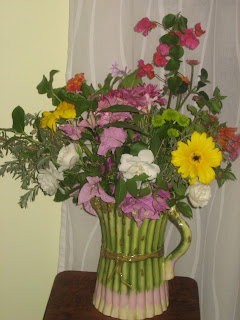 There wasn't a whole lot of money left in our budget, so we weren't sure what to do. But then I got to thinking that there were flowers and greenery growing in our yards - and on the stake center grounds themselves.

So we gathered up what was growing at the time and used the vases my secretary had bought up for her daughter's wedding reception that is coming up in November. And it looked great - I should have taken photos. Afterwards we gathered them up and each of us took home an armful - and my armful looked like this.

We were inordinately proud of our skill and frugality!!
Posted by grannybabs at 10:08 PM 2 comments:

The Joys of Teaching

I am involved in a collaboration model where I teach. 11 RSP students are clustered in an 8th grade Science class, and I co-teach with the general ed instructor. Since 8th grade Science is physical science - think chemistry and physics - I mostly support the teacher. He does let me do the inter-active reader with them as a group, but I don't think he's sold yet on my scientific abilities. But he does appreciate having another adult in the room to monitor progress - and on-task behavior - and he is growing in his confidence in my abilities!! 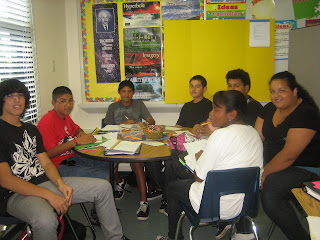 The students go with me to my room to take their tests, because some of them do better if I read the questions to them. I have 7 of them in my Study Skills class, so they decided to do their water content project as a group - and it was certainly fun to watch them dive into the project. This is significant, because these are kids who traditionally feel like they aren't doing things right, and worry about looking bad in front of their peers.

They did a good job on the project - it was spread out over about 3 weeks - it involved drying out fruit see how much of the fruit was water - a standard middle school science project. I got a display poster for them, and they tabulated their results and did a nice job of displaying the work they had done. When they were finished, they - at least the boys - wanted to take it over to the science room. All 5 boys "carried" the poster across campus to turn it in. It was gratifying to see the joy and sense of satisfaction they displayed.

I guess this is why I keep teaching!!
Posted by grannybabs at 10:15 PM No comments:

So, Bonny is 40 today. Doesn't really seem possible that all those years have gone by. Most of the young women I know who turn 40 have a pretty different experience than I did turning 40! 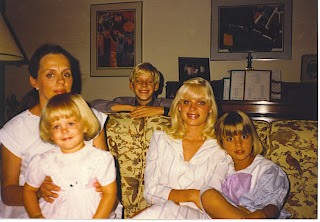 The above photo - taken when we got ready for Karen and Jeff's reception - is from the year I turned 40. And in case you can't tell, I'm pregnant - with Hannah! 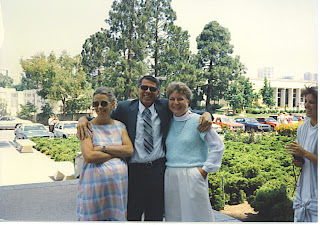 Here I am with Jim and Trudy on the temple grounds that same day.

Posted by grannybabs at 12:01 AM No comments:

We're here in St. George for the marathon - which Harry ran this a.m. - so we missed the first session of conference. But Harry had no desire to go anywhere after that, so we snuggled in for the second session - with carbs and electrolytes to fortify the recovering runner!!

These words resonated with me - mainly because I keep thinking how I'm going to change and be the person I want to be. Turns out I'm going about it backwards!

I'll keep you posted on my progress. But then, if I go about it correctly, you ought to be able to see my progress!!
Posted by grannybabs at 3:19 PM 2 comments: