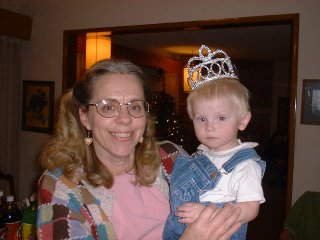 For several Mondays now, we have not had school - MLK, inservices, Winter break, etc. And actually there are more Mondays off coming up. And it is strange how not having a regular Monday throws the week out of whack. (And when a real Monday does show up, we say, "aack, it's really Monday!!")

Since much of teaching school has to do with routine, not having a regular Monday throws off the routine. And kids say, "What about our Monday night homework?" And you say, "Well, we won't have any Monday night homework since there wasn't a school Monday this week." And my students tend to be confused all week about it.

Not having a "real" Monday also makes the weekend seem longer and more relaxing. So when I do have to get up for a "real" Monday, it can feel oppressive. I could go for a 4 day work week - let's start lobbying!

And I got confused tonight. Yesterday was an Inservice and I went to a conference in Arcadia (at the Masonic lodge next to the library) on Asperger Syndrome. It was pretty boring and I was disappointed that it wasn't more helpful, but it was a change!

And I didn't have to be there until 8:30. And they supplied lunch and snacks. And we sat outside on the Arcadia Libray lawn to eat our box lunches. And afterwards, since there was a lot of congestion in the parking lot, I went and browsed in the "Friends of the Arcadia Library" shop - and found a great recording - on vinyl - of the Weavers singing lots of cool Pete Seeger stuff - and it was only 60 cents!

And on the way home I stopped at the LDS Bookstore and browsed. Then hit the 99 Cents store and found these great strawberries for 99 cents a box - and ran into Jane Andrews from the Nursery School.

And came home to the fact that Dawn was there fixing dinner for all of us!!

Gotta love a Monday off!!

P.S. I got confused tonight when Harry went off for basketball - I was waiting for FHE to start!

What I Do All Day! 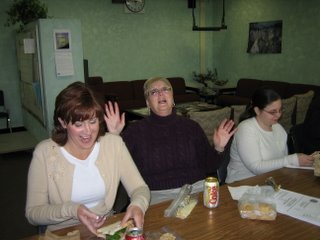 This isn't really what I do all day - but I thought you might enjoy a shot from the teacher's lounge - which is where I have my lunch every day - and pretty much have the same thing for lunch every day.

It is interesting how eating with the same group of people day after day becomes a bonding kind of experience.

Some days I think I'd rather be in my room reading, but I think it's good to get out of my room. If I stay in it, someone might come in with a need for me to take care of - and there would go my break. That sounds worse than it really is - for me anyway, I have to "step away mid day" or I don't have as much to offer my kids!
Posted by grannybabs at 9:14 PM 2 comments:

The Blues Brothers on Monday Night

Noah is watching "Blues Brothers." At least I think that is the title. Hence my title.

I was going to make Sunday night my regular posting time, but we had a power outtage last night. I had commented on the winds last week, but they were mere breezes compared to last night!

The streets and lawns are littered with fierce looking palm fronds with sharp spikes! But the air is clean and clear and the foothills stand out in dramatic relief.

An unusually large number of students stayed home from school today - that's to let you know how unsettlingly strong the winds were.

And I was going to do a remarkable piece of literary genius and post it - but Harry came over with the kidlets.

Then I started making pumpkin chocolate chip cookies - and didn't have any pumpkin. So I went to the store and Eve went with me.

And of course I got in the worst line - it looked like the shortest but there were computer snafus with the registers.

By the time I got home - with four 9 volt batteries for the 4 sets of walkie talkies I had found in the pantry - it was time for Harry and the kidlets to leave. (But not before discovering that none of the walkie talkies worked, even with new batteries!)

By then it was time to have FHE - we had told Noah to be home at 7 for FHE. And we had a great FHE.

Another late dinner a la Continental Mode! And since I'd made a double batch of pumpkin chocolate chip cookies, it was a chore to get them all baked - but I did.

You know, you give a mouse a cookie - and you could be up all night!
Posted by grannybabs at 10:45 PM 6 comments:

I do not even remember who wrote that - I will have to ask Dad - he remembers those kinds of things. But the Santa Anas are howling fiercely - and the cracks in this old house are letting in the cold. But I have my trusty space heater to keep my toes warm, so I am set!

Another Sunday night - but this one is the night before a holiday featuring "NO SCHOOL" and so it's a special Sunday night. Although I have to get up early enough to go for a fasting blood test - just depends how long I want to wait for breakfast I guess! There is something about not having to get up at a specific time!

I do not have my new camera yet - although I could take pictures with my old one - but Dad has been taking work pictures and I don't feel like wading through "construction shots" anyway.

It has been a good Sunday - and a good Saturday. Dad and I went and saw "Walk The Line." (On Saturday, not Sunday!) I enjoyed it - mostly impressed at how someone could so exactly become Johnny Cash. Upon reflection, Mr. J.R. Cash is not a particularly stellar fellow - I suppose he redeemed himself - but then movies about "stellar fellows" probably wouldn't be terribly entertaining or engrossing.

Which leads me to the thought that is it possible as you strive for perfection to become a great artist? I have often heard it postulated that great Mormon art and artists are not to be - because great artists seem to be self-absorbed. And they seem to focus on the seamier side of life. Or maybe in their self-absorption they neglect the finer things? These are just random thoughts.

In the meantime, I guess I will continue to read the artists who are busy being self-absorbed - and comment on it now and then.

And it was William Shakespeare, in King Lear - a fellow who may or may not have been self-absorbed (Billy boy, not Lear!)
Posted by grannybabs at 6:45 PM 5 comments:

This may seem extraneous - but it's not - however, it may be circumlocutious! At any rate, we finally are getting elders, not sisters - and I am very sad - but that could be a whole different blog in itself - I will just say that I think every ward ought to have a pair of sisters and a pair of elders!

But I digress - since the sisters are leaving, we are waiting around for them to come by to say good by and take pictures and have your dad offer them mini cups of Ben and Jerry's. (Is that the key to his phenomenal success as a Ward Mission Leader?)

I keep digressing! So, we can't get casul and put on our p.j.'s - your dad is considering the LA Times crossword puzzle - but if I went up front, he's probably fallen asleep over his new Joseph Smith book.

And there is lots to do, but it doesn't seem appropriate for Sunday - and it's back to school tomorrow - boo, hoo!!

I'm trying to be philosophical and think that blessings will come with elders - even if I feel like I'm losing two right arms! The women of my ward will just have to step up to the plate and start delivering the service that the sisters were able to deliver to the elderly sisters in the ward who live alone and need someone in the daytime - when I'm at work! Queen Anne Cottage
Originally uploaded by grannybabs.
Maybe it was the gray raininess of the day, but when Matt, Eliza and Hannah drove off Sunday, I felt a pang of melancholy! And then when Phoebe, David, Henry and Calvin drove away, I felt lonelier still. By the time Bonny, Bruce and girls left (which was a bit later - but that's a whole other post!) I was feeling a physical ache.

Harry, Dawn and kids then showed up for dinner. Dawn could relate to my feelings of melancholy - she said she always had the same experience when family left or she left from home. So I didn't feel so alone.

After everyone was gone, Dad and I went through the house picking up, putting away, vacuuming, washing dishes, sweeping, mopping, moving furniture back where it belonged, putting futons away, folding bedding, washing clothes, finding lots of little treasures that had been left behind. I thought that should all have been "closure" but I still really "missed" everyone.

Today dawned rainy and cold. I usually don't watch the parade, but Dad and I checked it out for a bit. Maybe it was more interesting in the rain!! Those clear plastic ponchos have a certain panache! Harry showed up with Eve and Porter, and we were still in our p.j.'s and hadn't even eaten breakfast yet. A true holiday morning!

So I started putting Christmas stuff away - not all of it - I didn't feel up to the task - but I did move all the traces of Christmas out of the bathroom, kitchen and bedrooms. Then I cleared off the mantel and the hutch - and put the regular pitchers back.

And Dad made pancakes - from a recipe - a first for him - he said, "Where's the pancake mix?" Since there was none, he did it the old-fashioned way!! (With the Better Homes and Gardens Cookbook!)

I started piling up Christmas stuff in the family room and put the Christmas dishes back in their boxes. I packed up the Christmas tee shirts and sweaters and linens. And it kept raining - we had fires in both fireplaces.

As Christmas faded away, I thought about all the things I should have said and done. One of the problems with a large group of people is that sometimes it's hard to have private conversations of any length. Especially if you're the mom in charge. And large groups of people can have "difficult" moments, and we don't always show our best side.

Dad and I talked about what worked and what didn't - now the key is to write it all down and look at it before next year's celebration!

I think we made some positive changes this year - assigning meals was a stroke of genius - thanks to all who did them - they were great! Clocker's Corner, Kidspace, Burminco and tandem bike riding were plusses too. We didn't communicate perfectly, but we did better than other years!

So why the Queen Anne Cottage pix? Maybe it's to say that a house is only a building when no one is in it. A loving family makes it a home. And when some of those family members leave it, they take something with them - something we miss - and when they are back for awhile, we start thinking we've gone back in time. And we have for awhile. And we have to readjust everytime.

But it's worth it - missing you guys, welcoming you back, saying goodbye -and looking forward to the next visit!
Posted by grannybabs at 10:41 PM 10 comments: