More Vintage Baby Stuff
Originally uploaded by grannybabs.
I had forgotten about this bouncing chair, because the one I have now is the plain blue one - which works beautifully - and it was one piece of baby furniture that Bruce approved of - undoubtedly because of its minimalist nature!

I think this plaid one was a shower gift with Eliza - and I think it might have "worn out" so I got the plain blue one with Noah.

And even though this fabric has a pattern, compared to the models they have now, this one could also be deemed "plain!!"

Regardless of the fabric, these bouncing chairs were a personal fave of mine. They worked better than a swing for my kids - a little tap with my foot and the boucing started!

And unlike the plastic carriers that were all the rage when Bonny and Harry were born, they molded to the baby's shape like a hammock or sling - a plus in my book.

This little sunsuit Eliza is wearing was another personal fave of mine - it was printed terry cloth - soft and absorbant.
Posted by grannybabs at 11:49 PM 6 comments:

I have observed that many bloggers are given to "lists" like "ten things that drive me nuts" or "ten tunes to tickle your toes." Ten seems to figure prominently in these endeavors.

I usually have a hard time coming up with more than 3 of anything. Probably because I was trained in Advanced Comp in 12th grade to give three supporting details when writing an essay. Of course, I could probably come up with "ten places I've visited" or "ten people who have had an impact on my life." But I think that's been done.

So I started thinking about what I could put on a list of ten. I thought maybe I could write about "The Best Advice I've Ever Received." I thought it had a nice sound to it, and could be elucidating and maybe even helpful. Especially since advice is often helpful - especially when we take it!

I was surprised to discover that it took awhile to come up with ten. And I know that bloggers often start with the least and go to the biggest or best. But my walk wasn't long enough for that So here they are, the ten best pieces of advice I've ever received or given - in no particular order - although I am starting with the one I thought about first!

1. Whenever I go to a baby shower and they ask you to write advice for the mom-to-be, I always share the advice my mom gave me many years ago: Never do anything when your kids are asleep that you can do when they are awake. (Advice she often took - I have many memories of coming home from school to find my mom stretched out on the couch reading - while the unfolded laundry sat on the hearth - or was still on line for us to go bring in!)

2. In that same vein, wheneverI go to a bridal shower and they want you to give advice to the bride-to-be, I always share this advice that Ida S. shared at someone's bridal shower a number of years ago: Never learn to mow the lawn - if you do, it will become your job.

3. Once Eliza wrote and asked for advice about some future choices she was facing. I was thrilled to be asked, but found that I was giving her some pretty standard - but nonetheless excellent - advice: It will never be easier and cheaper to do than right now.

4. I ended up an English major in college when my roommate Pat said, after asking me what I was going to major in, and I replied maybe math or French (don't even ask why I said math, because I have not had a math class since 11th grade, but I said it anyway), "Major in English, French takes too many units and math is too hard." I've never been sorry I followed her advice.

5. Harry's 2nd counselor when he was Bishop once said, "Have you taken the CBEST?" I said no. He then said, "Take it and I'll get you all the work you need." (He was the principal at Clifton at the time. Another excellent choice in my life.)

6. When Bishop Cornwall called me to be Ward Relief Society President, I was trying to think of some compelling information to share with him that would cause him to say, "Oh of course I'd better retract that request." Of course I came up with nothing of the sort. So I looked at Harry and said, "What do you think?" And he said, "Yes is always a good choice."

7. Back in the day when diapers were cloth and were atttached with pins, the best advice I ever got was to keep a bar of soap handy to stick the pins in - they slid in and out like a dream! (Running the pins through his beard worked well for Harry!!)

8. My sister Alice once said that her mother-in-law - or maybe it was her sister-in-law - said that if you wanted to sew, you had to learn to do it a seam at a time. It's true - and it works for me. (Of course it really only works if you have a sewing space you can close the door on.)

9. Speaking of sewing, my old roommate Marlene, said that if you wanted to get any sewing done, you just got up in the morning and started sewing - and don't worry about getting dressed or making the beds - if you stopped and did that, you'd never get to the sewing. And I believe that's true for just about anything you want to get accomplished.

10. And to wrap things up - some baby advice - which seems to be the kind we women hear the most often: Never tell anyone what you are naming your baby before it's born. Somehow no one minds saying "I wouldn't stick any kid with that name" when the baby's not here. Once here, it really is too rude to say "Your baby has a terrible name."

Except when my dad called after Phoebe was born and found out that we were naming her Phoebe Elizabeth, he said, "I'll call her Betty!"

But he always called her Phoebe! And we all know Phoebe's name is a perfect fit!
Posted by grannybabs at 7:31 PM 5 comments: 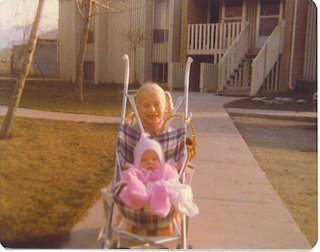 Umbrella strollers are almost a fact of life now - like microwaves and VCR's and cell phones. But I was there when they invented them!! And we had one of the first ones!! And we thought it was the proverbial "bee knees" as they say.

(Which reminds me that we were among the first on our block to have a calculator - and it took 8 double AA batteries and only had a red LCD screen - no tape, no memory, just added, subtracted, divided and multiplied. And we thought we were so hip and with it!)

But I digress. Here the little plaid umbrella stroller features Bonny and little sister Phoebe in front of the Cook Apts. in Centerville in 1978.
Posted by grannybabs at 11:45 PM 1 comment: